THE RICHMOND 34 AND THE CIVIL RIGHTS MOVEMENT 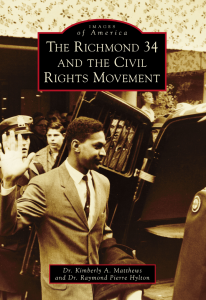 Images of America: The Richmond 34 and the Civil Rights Movement provides a pictorial history of one of the first efforts that shaped the Campaign for Human Dignity civil rights movement from 1960-1963. Experience through vintage images decade predating the arrest of 34 Virginia Union University students, known as the Richmond 34 on February 22, 1960 to the celebratory events commemorating what would forever change the social, political, and economic life of a city, a state, and millions of inhabitants. This book provides the story of the courageous students during a sit-in protest at the most upscale department store in Richmond, Virginia, heralded the upending of a long-established way of life and a change of direction from which there would be no turning back. The students would see their actions galvanize a community into affecting wide-ranging reforms in desegregation and play a significant role in ending the nearly 70-year grip on power of one of the nation’s strongest political machines. Surprisingly, their achievement faded into obscurity, and only in recent years has its importance been recognized.

February 22, 2020, will mark the 60th anniversary of the Richmond 34’s arrest.  Dr. Kimberly A. Matthews and Dr. Raymond Pierre Hylton want their work to contribute to the rediscovery of this historic event that changed the landscape of Richmond, Virginia and beyond.

Buzz About The Book